I’ve spent the past few years trying to simplify the caries risk assessment process by helping dentists learn to identify the major patterns I see with dental caries. I’ve utilized the concept of the “Usual Suspects” to describe the major patterns of the disease. Most recently I’ve added genetics to the suspects based on the growing body of scientific evidence1-4. A dentist recently asked me about the genetic influence on dental caries. His particular concern and frustration was he didn’t know what to do with the information. How do I recognize it? How do I test for it? How do I treat it? All very valid questions and I remember my first impression on the topic.

In January 2013, Shaffer and Feingold et al5, published a paper in the Journal of Dental Research that challenged my views. It was a genome wide association study involving 920 adults, ages 18-75, and they examined dental caries against 518,997 gene sites in these individuals. They discovered a number of genetic associations and interestingly identified geographic patterns of lesions in the mouth as they related directly to specific genes. One of these correlations was between LZL2, a gene for a defensive bacteriolytic enzyme found in the saliva, and caries lesions only present in mandibular incisors. I distinctly remember reading this study and finding it interesting, but didn’t buy the connection. I was pretty certain I’d never seen that in my entire career. If there is one question every dental professional can answer, it’s if a patient has six teeth remaining, or two teeth remaining, which ones are they? The mandibular incisors are the most protected teeth in the mouth, they are bathed in 2 liters of saliva every day. To have lesions ONLY in these teeth, sorry, it didn’t pass the smell test. So I put the study aside. Interesting scientific studies don’t always have clinical relevance. 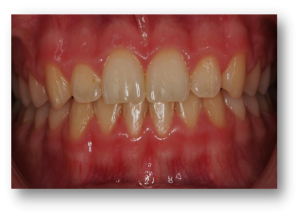 An adolescent with only caries lesions on her mandibular incisors.

Two weeks later a local pediatric dentist referred an adolescent to me that they were very frustrated in treating. She presented with lesions on all of her mandibular incisors, fig. 1, and these were the only lesions in her otherwise very clean and healthy mouth. They had previously restored these sites twice and they needed to be restored again. I took one look in her mouth, then looked at the mother and informed her that her daughter had a LZL2 deficiency. You can imagine her response after being frustrated with this issue for years. I’m a truth teller so I explained to her that I had only recently learned of this disease pattern. The mother then shared with me that she just realized she had the same issue as a child. Suddenly I had a case study of two. I have seen one additional patient with this pattern. I’m sure I’ve probably seen it in the past, but I just didn’t know what I was looking at.

While we currently have no genetic tests for dental caries, the day is probably coming fairly soon when we will have such tests. In the meantime there are specific geographic patterns that we can identify. And while I can’t currently change any patient’s DNA makeup, if I can help them identify their risk, I can help counsel them on a wellness approach and make effective recommendations to them.

V. Kim Kutsch, DMD, received his undergraduate degree from the Westminster College in Utah and then completed his DMD at the University of Oregon School of Dentistry in 1979. He is an inventor (holding numerous patents in dentistry), product consultant, internationally recognized speaker, past president of the Academy of Laser Dentistry and the World Congress of Minimally Invasive Dentistry. He has also served on the board of directors for the World Clinical Laser Institute and the American Academy of Cosmetic Dentistry. As an author, Dr. Kutsch has published dozens of articles and abstracts on minimally invasive dentistry, caries risk assessment, digital radiography, and other technologies in both dental and medical journals and has also contributed in several textbooks. He acts as a reviewer for several journals including the Journal of the American Dental Association. He serves as CEO of Oral BioTech. As a clinician, he is a graduate and mentor in the prestigious Kois Center and maintains a private practice in Albany, Oregon.