One of the greatest behaviors we encourage in our patients is of course tooth brushing, but what does the research actually say?

While it seems to be intuitive and logical, we don’t have a ton of science to support it reducing the caries rate. However, this study looked at children who were taught to brush their teeth in nursery school and then followed them over 12 years.

We aimed to assess the association between the roll-out of the national nursery tooth brushing program and a reduction in dental decay in five-year-old children in a Scotland-wide population study. The intervention was supervised tooth brushing in nurseries and distribution of fluoride toothpaste and toothbrushes for home use, measured as the percentage of nurseries participating in each health service administrative board area. The endpoint was mean d(3)mft in 99,071 five-year-old children, covering 7% to 25% of the relevant population (in various years), who participated in multiple cross-sectional dental epidemiology surveys in 1987 to 2009. The slope of the uptake in tooth brushing was correlated with the slope in the reduction of d(3)mft. The mean d(3)mft in Years -2 to 0 (relative to that in start-up Year 0) was 3.06, reducing to 2.07 in Years 10 to 12 (difference = -0.99; 95% CI -1.08, -0.90; p < 0.001). The uptake of tooth brushing correlated with the decline in d(3)mft (correlation = -0.64; -0.86, -0.16; p = 0.011). The result improved when one outlying Health Board was excluded (correlation = -0.90; -0.97, -0.70; p < 0.0001). An improvement in the dental health of five-year-olds was detected and is associated with the uptake of nursery tooth brushing. 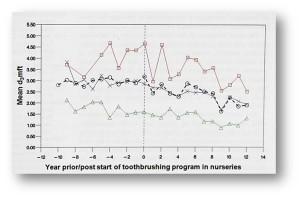 Toothbrushing is considered fundamental self-care behavior for maintenance of oral health, and brushing twice a day has become a social norm, but the evidence base for this frequency is weak. This systematic review and meta-analysis aims to assess the effect of toothbrushing frequency on the incidence and increment of carious lesions. Medline, Embase, Cinahl, and Cochrane databases were searched. Screening and quality assessment were performed by 2 independent reviewers. Three different meta-analyses were conducted: 2 based on the caries outcome reported in the studies (incidence and increment) with subgroup analyses of categories of toothbrushing frequency; another included all studies irrespective of the caries outcome reported with the type of dentition as subgroups. Meta-regression was conducted to assess the influence of sample size, follow-up period, diagnosis level for carious lesions, and methodological quality of the articles on the effect estimate. Searches retrieved 5,494 titles: after removing duplicates, 4,305 remained. Of these, 74 were reviewed in full, but only 33 were eligible for inclusion. Self-reported infrequent brushers demonstrated higher incidence (odds ratio [OR], 1.50; 95% confidence interval [CI], 1.34 to 1.69) and increment (standardized mean difference [SMD], 0.28; 95% CI: 0.13 to 0.44) of carious lesions than frequent brushers. The odds of having carious lesions differed little when subgroup analysis was conducted to compare the incidence between ≥2 times/d vs <2 times/d (OR: 1.45; 95% CI: 1.21 to 1.74) and ≥1 time/d vs <1 time/d brushers (OR: 1.56; 95% CI: 1.37 to 1.78). When meta-analysis was conducted with the type of dentition as subgroups, the effect of infrequent brushing on incidence and increment of carious lesions was higher in deciduous (OR: 1.75; 95% CI: 1.49 to 2.06) than permanent dentition (OR: 1.39; 95% CI: 1.29 to 1.49). Findings from meta-regression indicated that none of the included variables influenced the effect estimate.

“Individuals who state that they brush their teeth infrequently are at greater risk for the incidence or increment of new carious lesions than those brushing more frequently. The effect is more pronounced in the deciduous than in the permanent dentition.”(Kumar S, Tadakamadla J, Johnson NW. Effect of tooth brushing frequency on incidence and increment of dental caries: a systematic review and meta analysis. JDR October 2016. 5(11):1230-1236.)

So, there is evidence that tooth brushing does in fact help.

What we need to keep in mind is every time we put something in our mouth, the pH in our mouth changes. The teeth demineralize. The nano particles of Hydroxyapatite and Fluorapatite are trapped in the biofilm and immediately held back to the tooth so that when the pH raises after that episode the minerals are there, readily available to go right back into the tooth. There is a nice sense of equilibrium. If you brush your teeth, right after eating a meal or drinking an acidic beverage, especially with an abrasive toothpaste, you run the risk of increasing the erosion and surface wear of the teeth. I encourage my patients to brush their teeth before they eat. I also suggest they use a gel with nanohydroxapatite.

Social factors determine the child’s behavior and motivation is an important task in the teaching-learning process. This longitudinal and cross-sectional study aimed to analyze the effectiveness of a motivational activity program for oral hygiene habits formation after motivation and without constant reinforcement. Materials and Methods: The sample was constituted of 26 children (mean 6 years old) from a Public Kindergarten School in Ponta Grossa, PR, Brazil. Data were collected applying a test-chart, with figures reporting the process of dental health/illness. Some figures were considered positive to dental health (dentist/Cod 1, toothbrush/Cod 3, dentifrice/dental floss/Cod 6, fruits/vegetables/Cod 7 and tooth without caries lesion/Cod 8) and negative on dental health (sweets/Cod 2, bacteria/Cod 4, tooth with caries lesion/Cod 5). The figures presentation occurred in three different stages: First stage – figures were presented to children without previous knowledge; second stage – following the motivational presentation, and third stage – 30 days after the first contact. Results: On the first stage, most children select good for the figures considered harmful to their teeth (Cod 2-88%; Cod 4-77% and Cod 5-65%). On the second stage, there was a lower percentage: 23% (P < 0.0001), 8% (P < 0.0001), and 23% (P = 0.0068) related to the Cod 2, 4, and 5. On the third stage, the results showed again an association with the good choice to these figures considered harmful (Cod 2-85%, Cod 4-65% and Cod 5-54%) similar the results obtained on the first stage. Conclusion: The motivational programs performed without constant reinforcement does not have a positive influence in changing the child’s behavior related to a better dental care.